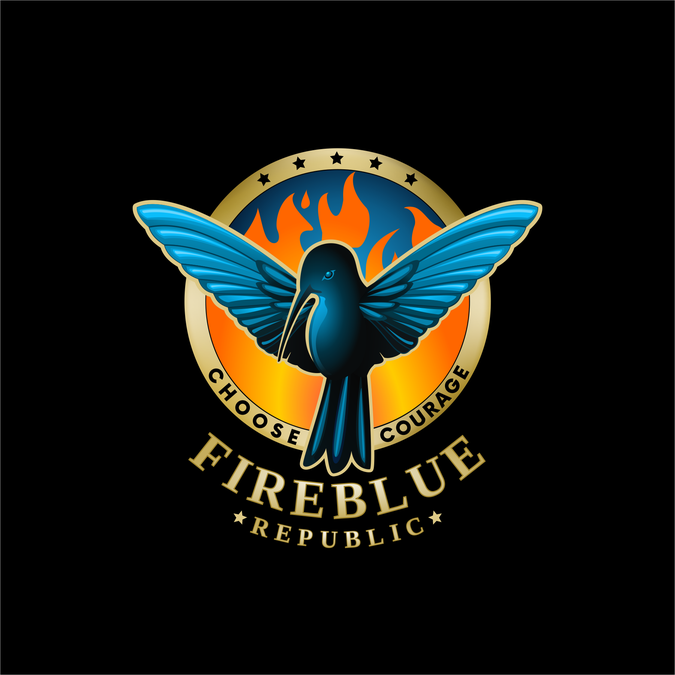 Design a state emblem for a fictional country of rebels!

sigridb needed a new logo design and created a contest on 99designs.

A winner was selected from 79 designs submitted by 10 freelance designers. 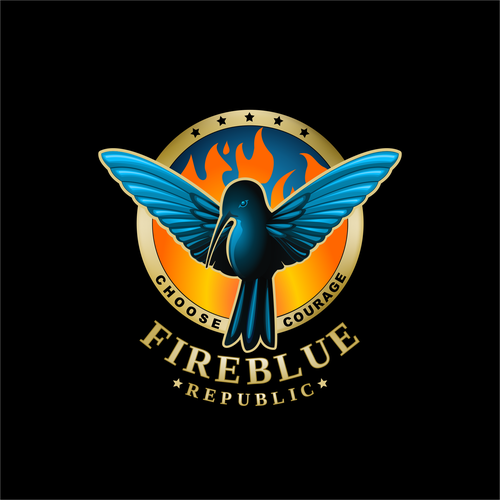 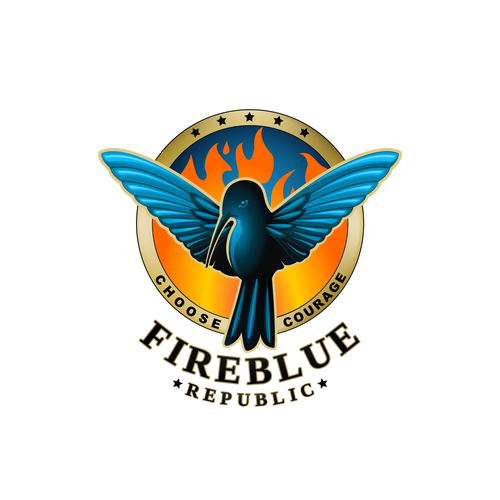 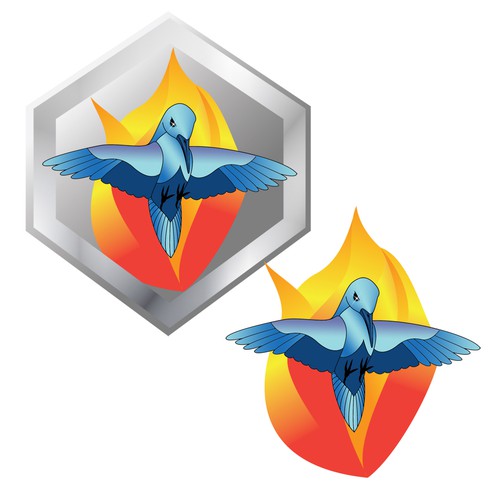 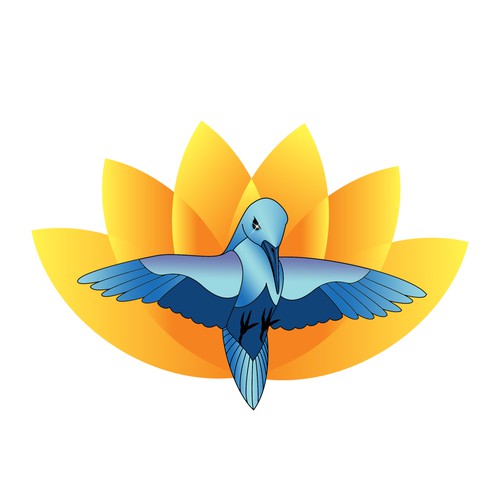 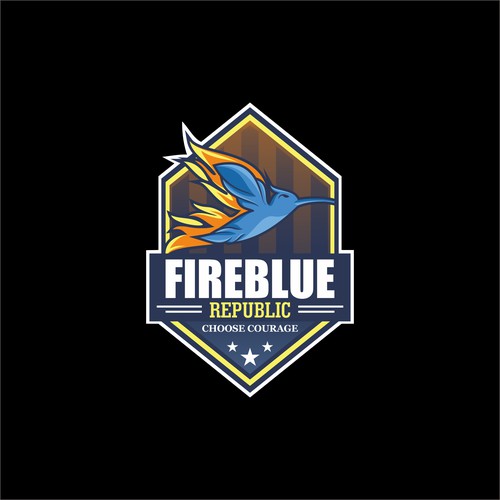 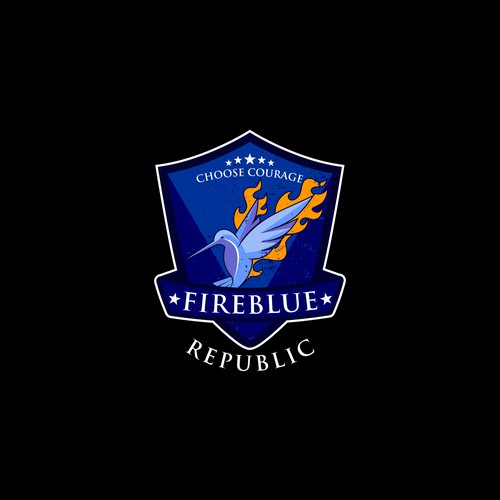 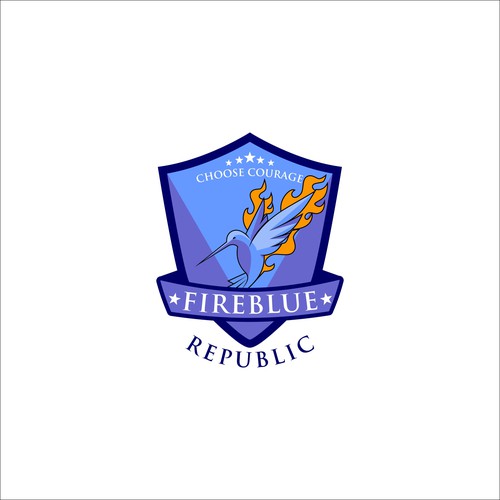 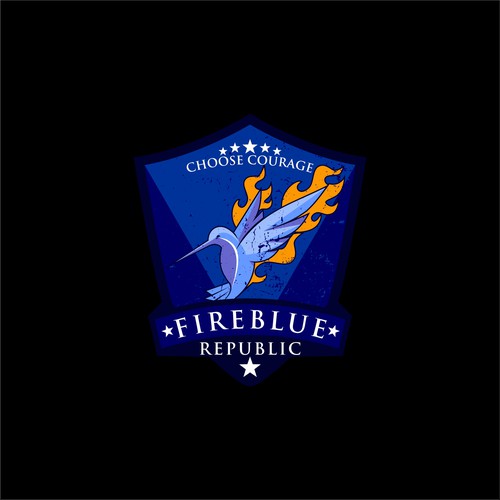 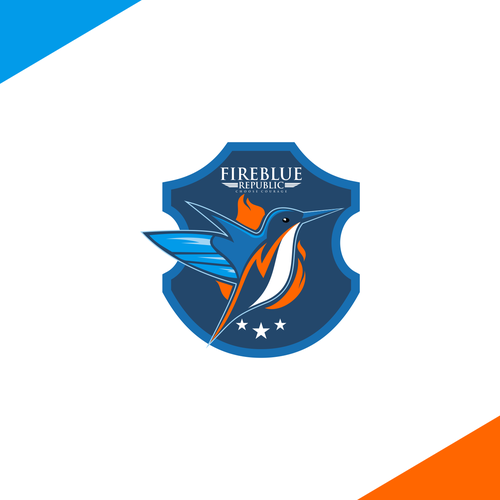 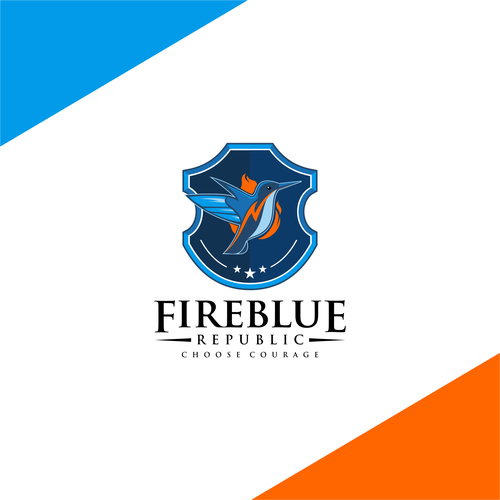 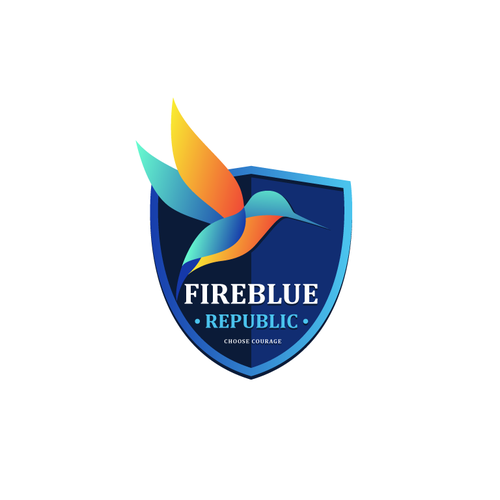 Winner - fzr3
Thanks for all the changes and for working with me. Will definitely do business again!
- rizzoT

This will be a logo/flag/emblem for a country in one of my fiction stories.

I am looking for a logo that can be used as a fictional flag(logo on top of solid background) but can also stand alone for merchandise as an emblem. It should be bold and portray strength and courage.

I was thinking of a bird as a national symbol for their bold independence. More like a hummingbird than an eagle. You can suggest other animals or birds, but my gut feel says hummingbird​. I'm open to suggestions, though!

It should be a credible state emblem with a Fireblue color theme, emphasis on the blue. There can be flame-like​ orange/red (like fire) accents, for example. The national slogan is 'Choose Courage' and their official state name 'Fireblue Republic'.

UPDATE: After seeing the first designs, I do realize I have a preference for designs that aren't too 'flat' or solid in their coloring. Please see the examples I included below. I really like designs where light and shade is used.

NOTE about design: please make sure it doesn't look too much like the artwork​ from the hunger games! This is my biggest worry because of the bird.

NOTE about legal limitations: This logo will be used for commercial use on merchandise! Please make sure any fonts used have a free or low-cost license to use the font in this way! ​

***BACKGROUND about the story***

The Fireblue rebels are a group of separatists who have disconnected from the rest of the world. They live in and around San Fran.

The story is dystopian and takes place in 2061. The rest of the world is connected and ruled by the Global Coalition, a dystopian world order. The Fireblue Rebels have installed a democratic society with less screentime and more focus on sustainable living. There are no smartphones, for example.

Until recently, the rebels tried to bring down the Global network by force with cyber attacks. They blew up all the bridges around San Fran to disconnect them completely. They are a proud mix of people who turned their backs on the 'world order'.

I like the state like /weathered atmosphere, but need more color :)
I like the shading. I don't like a human being in it
I like the feel. It's bold and thematic. It's a bit too busy for me, but I like the general style
I like the colours (shades) and animal
I like the different shades in the colouring. I like the creativity in the shape. I like the strength of the bird. With a logo like this, the text could just be under the emblem.
I like how everything is integrated into a non classical form. Doesn't have to be, though.
I don't like the style of this, but I do like the composition. The bird almost bursts out. The form more creative too

​This logo will be used for commercial use on merchandise! Please make sure any fonts used have a free or low-cost license to use the font in this way! ​

All7s - A new Gaming brand
$299
A board game, card game brand. The target audience is families with big children, friends gathering at the dinner table.
73
entries
15
designers
Coffee House Gaming Logo
$299
We're a gaming community.
104
entries
36
designers
Turn a 3 star logo into a 5 star
US$299
Improving one's trade skills and speaking openly about sensitive issues
110
entries
17
designers
It's ALL part of the Adventure! BaseCamper
$299
This is a slogan that will be used, I did not include it in the Slogan field as I don't necessarily want the Logo to alw
123
entries
16
designers
Sneaker Desodorisant Corporate Design
€269
biological desodorisant for the people who love sneakers as I do
36
entries
15
designers
A young and dynamic 5-a-side football fields centre needs a brand
$499
We provide football field facility, 5-a-side pitches for our customers to come and book on an hourly basis for 10 people
95
entries
13
designers

Get started now
Casino logo with a CLAW!
299 US$
CasinoClaw.com is a Hotels.com for the online gambling industry. Customers visit us to get information about slot games,
61
entries
26
diseñadores
New logo for retro video game console - MegaRetro
€269
We sell a single product, a retro video game console (the Megaretro). Our public is relatively young, especially nostalg
106
entries
22
designers
Logo for an Event Platform/App
€819
Calendify (https://calendify.com) aims to experience new things and bring people together: we believe it's important tha
265
entries
71
designers
BuncoPro Website
US$ 299
This is a hobby website, that will talk about bunco, the dice game. The site is meant to be light and fun.
57
entries
12
diseñadores
Shipwreck Shootout need a simple, bad ass golf logo
$299
Shipwreck Shootout is a weekend long golf tournament where the guys get together to have a good time and play competitiv
67
entries
16
デザイナー数
Kids play area needs a fun & exciting logo!
€ 269
Kids play area (aged 2-10 years old) located in a mall, lots of fun active supervised games. Parents drop off kids while
75
entries
34
designers