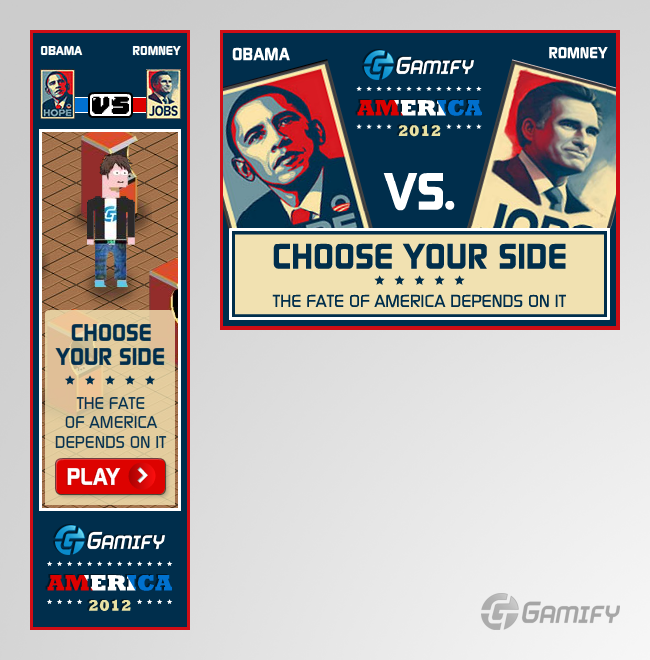 Show Us Your Style! Create "Gamify America" banner ad with Obama vs Romney!

A winner was selected from 34 designs submitted by 15 freelance designers. 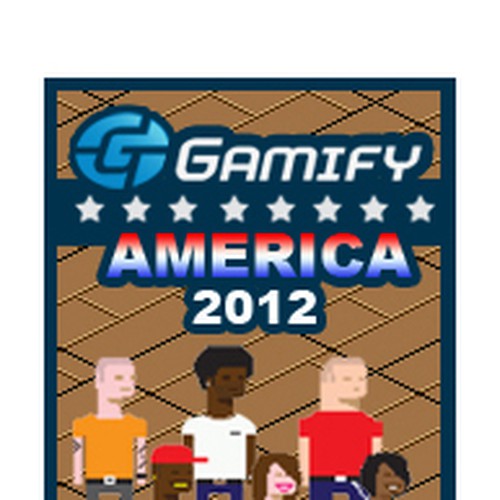 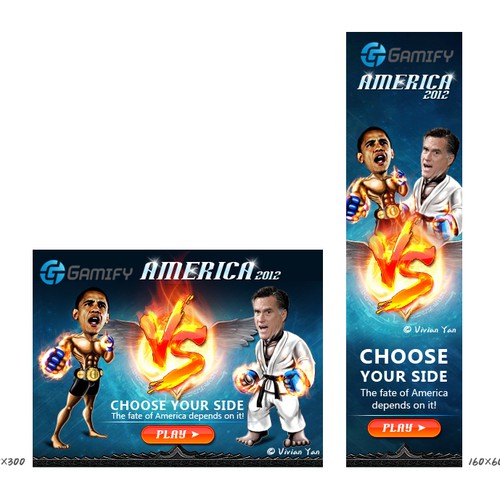 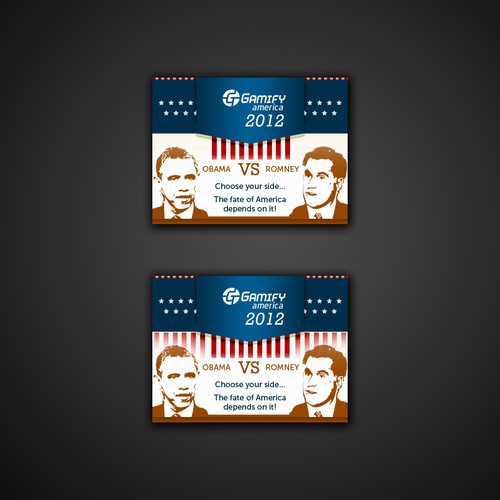 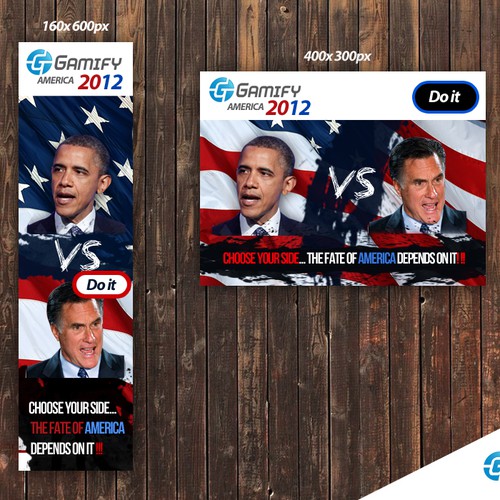 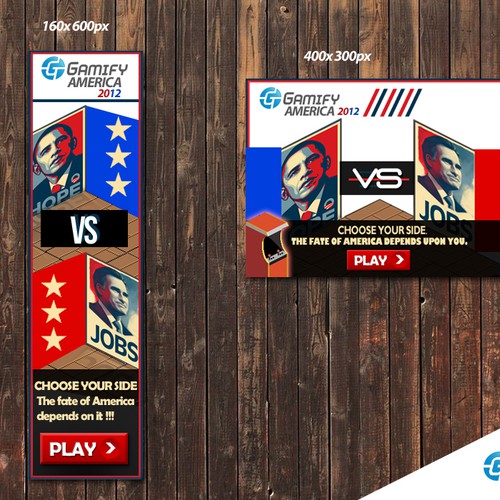 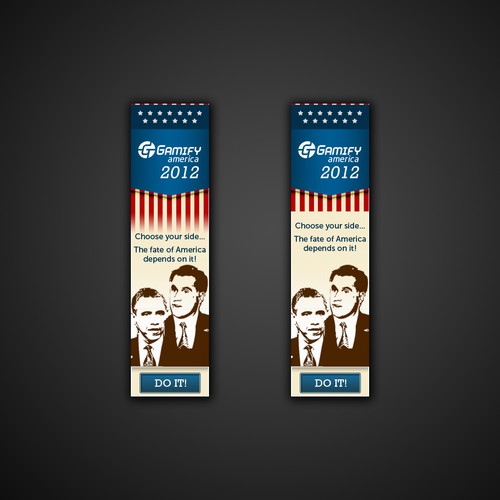 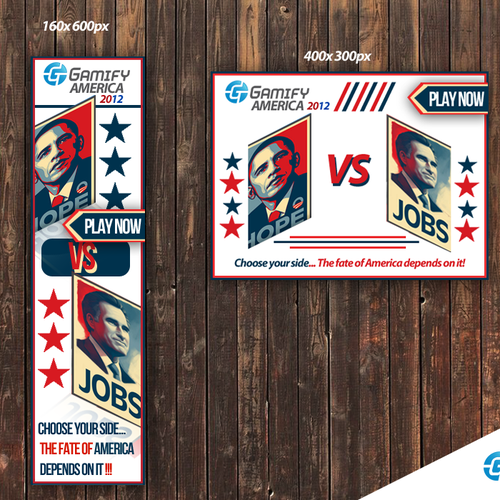 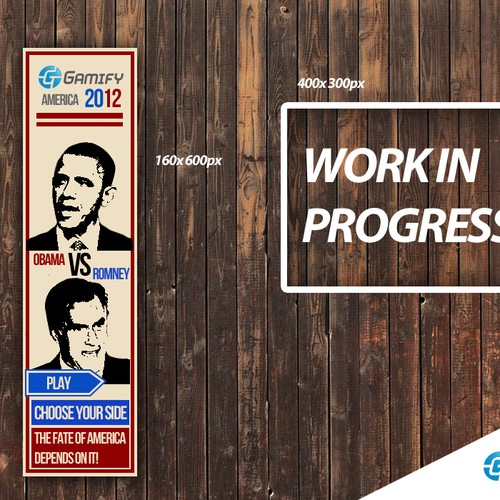 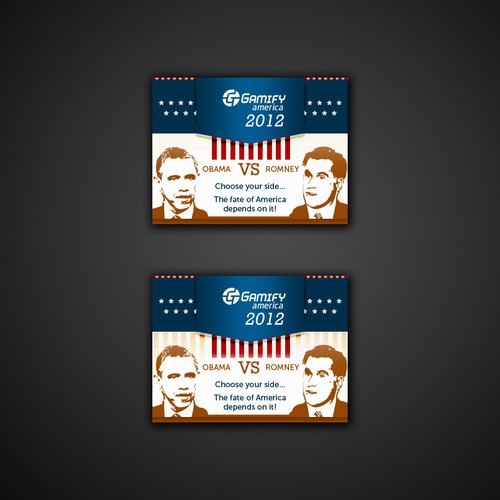 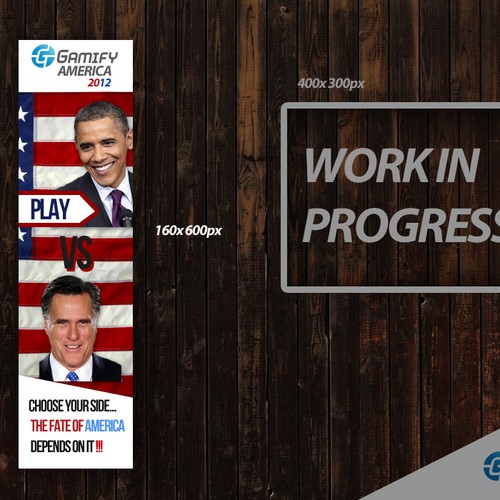 Finalist - MyKaila
I was so lucky to have MyKaila join my design contest. With every piece of feedback I provided, I got near immediate updates and often one or two completely new ideas and approaches to consider. I even got brand new ideas during the finals stage. It was a pleasure to work with MyKaila, even during handoff I was making last minute changes and considerations, MyKaila went overboard to ensure I was absolutely satisfied with my final files. I would not have another contest on 99designs without inviting MyKaila.
- SkateXS

Help promote our upcoming campaign to "Gamify America" with a cool ad. Gamify is a Silicon Valley based tech-startup, building the first ever html5 virtual world.

We need a banner ad and an introduction pop-up that will be used for a campaign we're doing called "Gamify America" where people will enter a virtual space and vote for the next President in a fun setting with other people from around the world. People who see the ad should be curious what "Gamify America" is, and think it's some kind of game so they click to check it out. The style should match with the virtual space it will be linking to, http://gamify.com/america. So first check that out and understand the style!

*400 x 300 version to place on our homepage and as a splash-page pop-up when you first visit http://gamify.com/america. This version shouldn't look like an advertisement because it's part of our website and just should be kind of a like an "intro" type of thing to frame what you're entering when you go into gamify.com/america.

* Gamify(our logo style) America(in red white and blue bubble letters for America)"
* sub-text "2012" which should be smaller than the Gamify America text.
* "Obama" and "Romney" over the character faces
* Text somewhere that says "Choose your side... The fate of America depends on it!"
* "PLAY" call of action button.

*Should include the Obama and Romney posters(HOPE & JOBS) somewhere in the design.

It should most likely include a screenshot from http://gamify.com/america so that it looks like a game you are entering.

Same as the 160 x 600 but it shouldn't look like an ad. Shouldn't include a screenshot of /america since you will already be in that room.. :)

We want it to be a balance between serious and funny, so that young people can think it's funny and cool and want to share it, but also regular people can think it's worth sharing because it can have some impact on their political party's success. So fun and playful design, but not too ridiculous. :) And should be fair and equal for both sides, so one side shouldn't look better than the other.

We have a separate contest right now for Avatars that include Obama and Mitt Romney, so you might check that contest out for ideas on how to make Obama and Romney look for the ad.

Good luck, we appreciate all of your designs!! We hope to find awesome designers through these contests that we can pay for work on an ongoing basis as our art needs continue to grow.

Also, we have 4 contests going on right now so please make sure to check out our profile to try the other contests if you're interested!

Get MagicHoldem a new Banner set
US$ 149
Provide software solutions for Poker players
29
entries
7
designers
Create amazing banner ads for #1 destination for football accumulator betting
£349
playgetin.com is an online gaming platform developed by Get In Gaming LLP. Our aim is to provide innovative, low-stak…
64
entries
14
designers
Need attention grabbing banner for business to business software!
US$ 199
We create software for ticket brokers to help save them time and money....
34
entries
10
designers
Thanksgiving theme banner for website
79 $
We manufacture commercial grade inflatable bounce houses for party rental businesses....
11
entries
7
Designer
Online Banner Ads
59 CA$
We host Group Buys at our website, www.gununiverse.com, on any and everything firearms and hunting related....
23
entries
7
Designer
iOS App - Ad Banners
119 €
CashQuizz is a Quiz App for iOS (Apple iPhone) where smart users have the possibility to win real money by being smar...
25
entries
5
designers

We saved a spot for your banner ad contest.